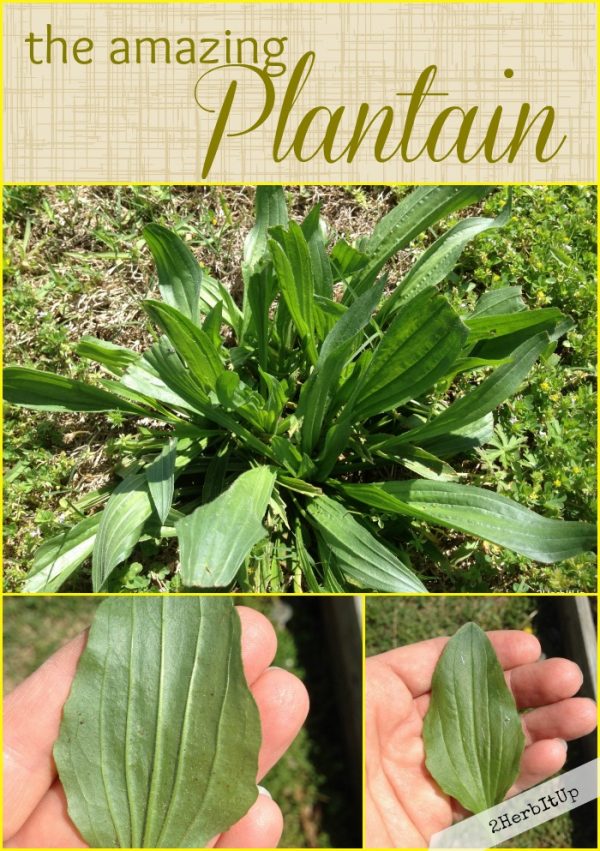 I want to introduce you to one of my favorite herbs-plantain (plantago major).  Now, I’m not talking about the fruit that looks like a banana.  Instead I’m talking about the weed.  Yes, it is a weed, and you probably have it growing in your yard.  Explorers and travelers carried plantain seeds as well as dandelion and others with them as they explored new lands.  It is now one of the most widespread wild herbs in the world.

As seen in the picture it is a solid green plant that grows low to the ground with no flowers.  Later in spring and throughout summer you will see several basal rosettes (long shoots or stems) growing up from the center of the plant.  The leaves are oval shape and can range from a long skinny oval to a shorter fat oval.  The most identifiable trait is the veins of the leaves.  Each leaf has several separate veins coming from the thick stem.  They DO NOT fork or branch, but instead are single lines running the length of the leaf.  The veins are ribbed on the back and easily seen and felt.   Take a look around your yard and you’ll probably find some-you may have even tried to get rid of it!

The use of plantain dates back as far as Alexander the Great.  According to Mother Earth News, the Greek medic Dioscorides used the seeds for inflammation and burns and the Chinese Han dynasty used it in tea form for bruises.

Plantain is an anti-toxin, anti-inflammatory, anti-microbial, anti-hemorrhage, and antiseptic.  So what exactly does all that mean? First, it means it has properties that draw out infections and venoms (stings, bites, poison oak/ivy, etc.)  That is what it is best known for.

Used externally as a poultice or salve, it will relieve pain and swelling almost on contact.

It can also stop bleeding.  Generally considered safe for internal use also, it can be chewed and held in the mouth to help toothaches.  This is why it is one of the main ingredients in my salve!

I’ve been making herbal salve for a few years now and using it on all sorts of things from ant and spider bites to wasp stings to rashes and acne to everyday cuts and bruises.  I’ve seen it work wonders on my kids, but experiencing it yourself is a whole new level of knowledge.  And boy did I get to experience it when a red wasp stung me in the arm.  I was hurting and immediately had a red whelp coming up on my arm.  I rubbed some salve on and within a few seconds the pain was going away and after only a couple of minutes the redness and swelling were too!  Within the hour, you would have never known I had been stung.  There was only a tiny dot where the stinger went in my arm, but NO OTHER SYMPTOMS!  Yes, I became more of a believer that day.

Not only do I use plantain in my salve, but I’ve also used it to make a plantain vinegar tincture.  This is THE BEST acne treatment there it!  Okay, so it doesn’t smell that great, but hey it works.  Because of it’s wonderful abilities to draw out toxins, it draws out the bacteria and dirt in the skin that causes acne.  Even that deep, under the skin acne is gone in a few days with this!  (I’ll post a complete how to on this soon!)

So get outside and scout your yard for plantain.  Then the next time you get into some ants, meet an angry red wasp or spider, or have Mt St. Helens erupting on your face, you’ll be ready.  You can also harvest and dry the leaves for long-term storage.  (Or just buy them here.)

Now you’re ready to save those weeds and HerbItUp!

Have you used plantain? Tell us your favorite way to use plantain as well as which herbal preparations you use it in.