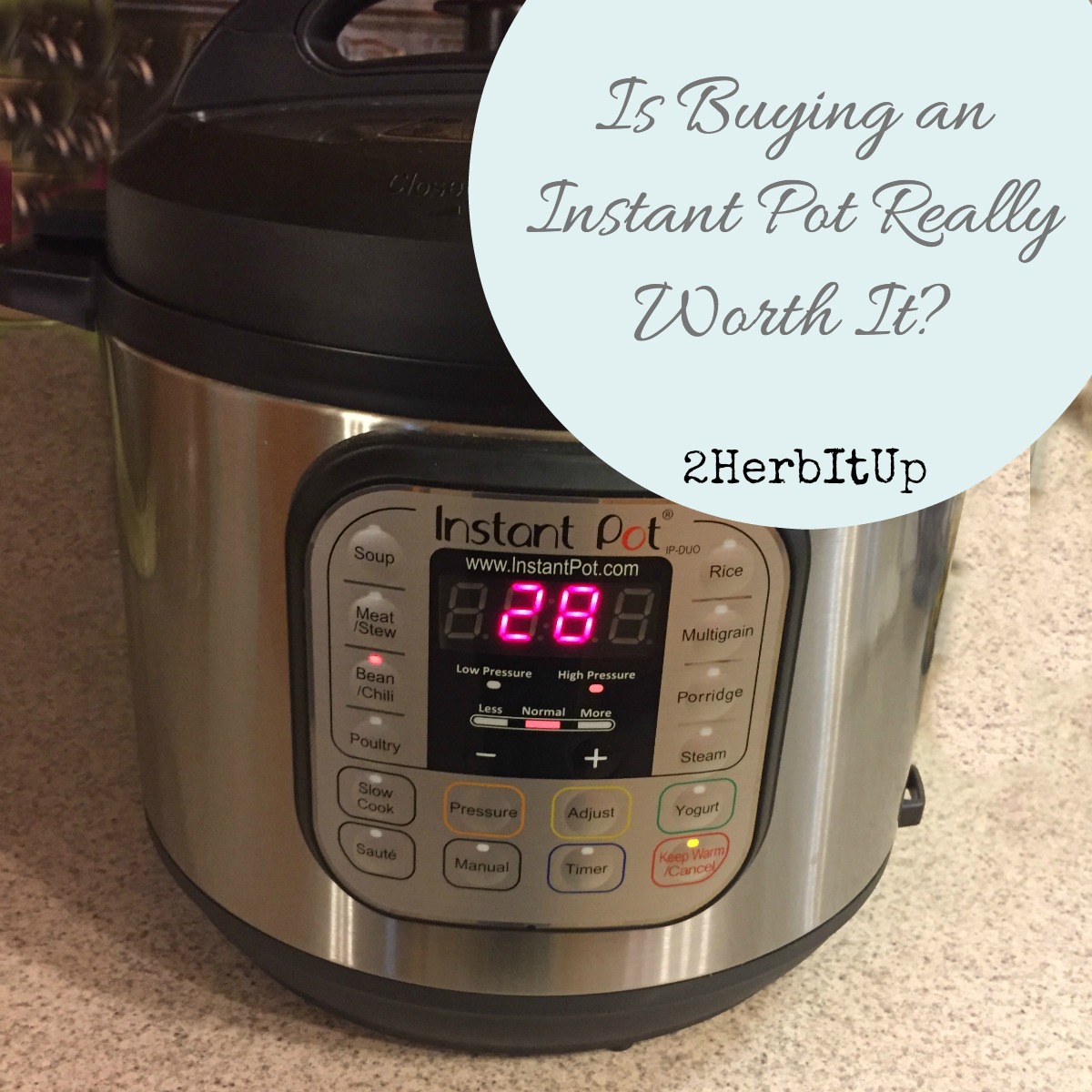 Electric pressure cookers have been around for several years and the Instant Pot is no exception.  But if you’re like me, you may have only heard of them in the last few months to a year.  Most of that is because of the surge of larger bloggers raving about them and the growth of Facebook Groups dedicated to recipes using only Instant Pots.

Needless to say, it’s hard to not hear about the Instant Pot and wonder if you should buy one.  Maybe you’re not sure if you’ll really use it or if it will be complicated to figure out.  Maybe you’re just a little nervous about using a pressure cooker.  Whatever the excuse, here are some other things to consider before buying an Instant Pot.

1.  Don’t buy an Instant Pot if you like washing multiple dishes for one meal.

The Instant Pot makes many dishes, like soups and chili, a true one pot meal.  Because the Instant Pot has a saute feature, you can cook and brown meat in the same pot before adding in liquids.  No more cooking/browning meat in one pan then transferring to a slow cooker to finish out the dish.  The Instant Pot can do both, making clean up quicker and easier.

Not only does this feature save on time and effort when it comes to cleaning up.  (Which in itself is great – can I get an “Amen!”) But it also makes the Instant Pot “green” in that you’ll use less water and dishwashing soap since there are less dishes to wash.

2.  Don’t buy an Instant Pot if you like spending several hours cooking a meal.

I enjoy cooking, but let’s face it, nobody wants to spend all day in the kitchen.  And life is busy, so cooking healthy meals from scratch often take more time than we want.  Enter the Instant Pot.  Because it is a pressure cooker, it can cook many meals in drastically less time than traditional cooking.  And it’s still a safe, healthy way to cook.

Just what can be cooked quickly in an Instant Pot?  Dry beans can go from the bag to done in an hour.  Yes, you read that right!  How about fresh greens?  Turnips and collards can be cooked tender in 30 minutes. Even meats like a meatloaf can be cooked in about an hour.  A whole chicken can go from freezer to table in about an hour too!  Add some water to that chicken and you have healthy, homemade broth done in an hour.  These are just a few examples of the myriad of recipes transformed by the Instant Pot.

3.  Don’t buy an Instant Pot if you like having to stand over your meals while they cook.

It seems that lately I’ve started looking more and more for recipes and meals that have little to no active cook time.  In other words, I don’t have to stand over them, stirring, watching, turning, etc while they cook.  The Instant Pot takes much of this out of many recipes.

Homemade sauces can be made using the Instant Pot without constant stirring and (if you’re me) without the mess made when it splatters because you didn’t keep stirring it.  The Instant Pot also has a rice setting making that a dump it and forget it dish.  Some models even have a yogurt setting, making homemade yogurt an almost one step food.

All of the functions have a timer setting so you don’t have to constantly watch your meals to turn them off when they are done.  The Instant Pot also has a delayed cook setting so you can even set it to come on at a certain time, leaving you free to play with the kiddos, finish homeschooling, clean the house, or any of the other thousands of things we moms take care of.

Just a side note here.  I would always recommend being at home when using the Instant Pot in the pressure cooker mode.  Yes, it must pass stringent safety tests and is very durable and well-made, but just as an added precaution, use this function only while you will be home.

4.  Don’t buy an Instant Pot if you want to make homemade yogurt or sour cream the hard way.

I’ve been making homemade yogurt and sour cream for several years now.  And I have to admit, it’s not rocket science.  But it does require you to be in the kitchen checking the temperature of the milk or cream, not letting it boil, and then letting it cool to a certain range.  I can’t tell you how many times I’ve boiled my milk or cream over.

But with the Instant Pot, much of this is done for you.  Simply use the steam setting to “boil” the milk or cream then use the yogurt setting to finish it off setting the timer for the length of time you want it to culture.  Here’s a recipe and video showing how easy it is.

The Instant Pot makes homemade yogurt and sour cream so easy that even the novice cook can make it with confidence.  And it leaves the veteran health food guru free to work on their kombucha, kefir or other healthy eats.

5.  Don’t buy an Instant Pot if you like appliances that only do one job.

I don’t know about you, but right now I don’t have much counter space, so I need appliances that can do double duty.  One of the top selling features of the Instant Pot is it’s multi-use ability.  And rightfully so.  The newer models boast ten functions/programs in one.  Even the older models have at least six functions.

Just what all does this appliance do?  The Instant Pot IP-DUO60 product features read

Another model has some of the same features, but has also added an egg and cake feature.  (Oh, did I not mention you can also make cakes, breads, and desserts in the Instant Pot?  Well, yep, you can do that too.) And yet another model even has bluetooth capabilities making it even more functional and hi-tech.

And yes, it really is that functional.  I made chicken broth one morning-starting with a frozen chicken-in an hour.  Then, I used some of the broth and shredded chicken to make chicken noodle soup all in the same pot.  The best part was that I set it and walked away for both the broth then later the soup.  I was also able to set the inner pot in the fridge to keep the leftovers for lunch the next day. 6.  Don’t buy an Instant Pot if you like really complicated, hard to use appliances.

I’ll admit I’m not always the best at reading the instructions first.  So it’s no wonder that I only read the safety precautions before I tried out my Instant Pot.  Most functions are pretty straightforward.  The slow cooker, saute, and keep warm functions are all easy enough to use without directions, although they are provided.  Directions for the other functions are simple and easy to follow also.

Not only does the Instant Pot have multiple pre-programmed functions, it also has a manual option making it even more versatile.  This is great for tweaking recipes or when you just want more control over your cooking.  And it makes using the Instant Pot even more simple and straightforward.

7.  Don’t buy an Instant Pot if you like eating cold or over-cooked food.

As I’ve already mentioned the Instant Pot has a timer feature so you can start your food and forget it.  But this also comes in handy so you don’t overcook your food.  But many appliance have that, so what’s special about the Instant Pot?  Well, it also has an automatic Keep Warm function.

After it completes a function it goes into the Keep Warm function so your food stays warm, even if you’re not ready to eat yet.  Great for those meals with dishes that don’t all get done at the same time or for those days when things happen and you don’t get to sit down for dinner when you planned.  (Hello, hand up because that happens more often than not at our house.)

Hint:  It’s also handy if your husband has to work late.  He’ll still get a hot supper that’s not over-cooked and think you’re the best cook in the world.  🙂

8.  Don’t buy an Instant Pot if you like appliances made with cheap quality and poor design.

The Instant Pot is made with a steel, smudge resistance exterior.  It comes with a stainless steel interior cooking pot and a stainless steel rack with handle.  The lid has a locking mechanism that beeps and shows on the screen when locked/unlocked.  Both the lid and inner pot are dishwasher safe.

The Instant Pot also meets or exceeds multiple safety tests and regulations and has many safety mechanisms built in.  Many of these features are designed to automatically shut off the Instant Pot in case of excessive pressure, temperature, or electrical current.

One plus of the Instant Pot is that replacement and extra parts can easily be purchased.  You can purchase a second or replacement interior cooking pot along with a glass lid for use when using the Saute or Slow Cook function.  Many people also purchase a second silicone sealing ring for the lid.  They use one for sweet dishes and one for spicy or savory dishes.

9.  Don’t buy an Instant Pot if you like eating unhealthy, processed food or microwave dinners.

Okay, so you can still cook meals that have processed foods in the Instant Pot.  But why would you want to when you can have fresh, steamed carrots, corn, or peas in less than 10 minutes.  You can steam potatoes in 15 minutes, have a pot of homemade chili or stew in an hour-all cooked in one pot.  How about fresh greens cooked in an hour.  You can even make hard boiled eggs that are fresh from the farm and still easy to peel. If you’re worried about finding recipes that are healthy and use the Instant Pot, have no fear.  There are a multitude of Facebook Groups with hundreds of members all sharing recipes.  There’s even an Instant Pot Group that is dedicated to Trim Healthy Mama recipes.  Maybe you want traditional foods cooked in the Instant Pot.  Wardee at Traditional Cooking School has you covered.

Honestly, there is not a diet or eating style that doesn’t have a blog, website, or Facebook Group with an Instant Pot section.  It’s just that popular and easy to use.  A simple google search will locate multiple sources.  I’ve even added an Instant Pot category here on my blog because of how useful it is in my own kitchen.

So the bottom line is that the Instant Pot really is as good as you’ve heard.  I consider it a worthy investment in my family’s health and received one for Christmas.   Since I use mine multiple times a week, I keep it sitting out on my counter.  In other words, it’s not one of the many things I’ve wanted, bought, didn’t use and ended up stuck in the back of a cabinet somewhere.

If you’ve been on the fence trying to decide if you really need an Instant Pot, I hope this helped.  You can find the one I have by clicking here.  And for some of the healthiest recipes and not so obvious ways to use an Instant Pot, check out Traditional Cooking School.

Welcome to the Herb It Up Shop Dismiss