A few years ago, our history curriculum was focused on the timeframe from Creation to the Greeks.  It was so fascinating seeing how all the things in the far past fit together in history.  But since we followed the Biblical timeline and focused quite a bit on Israel we also learned and celebrated the different Jewish holidays throughout the year. 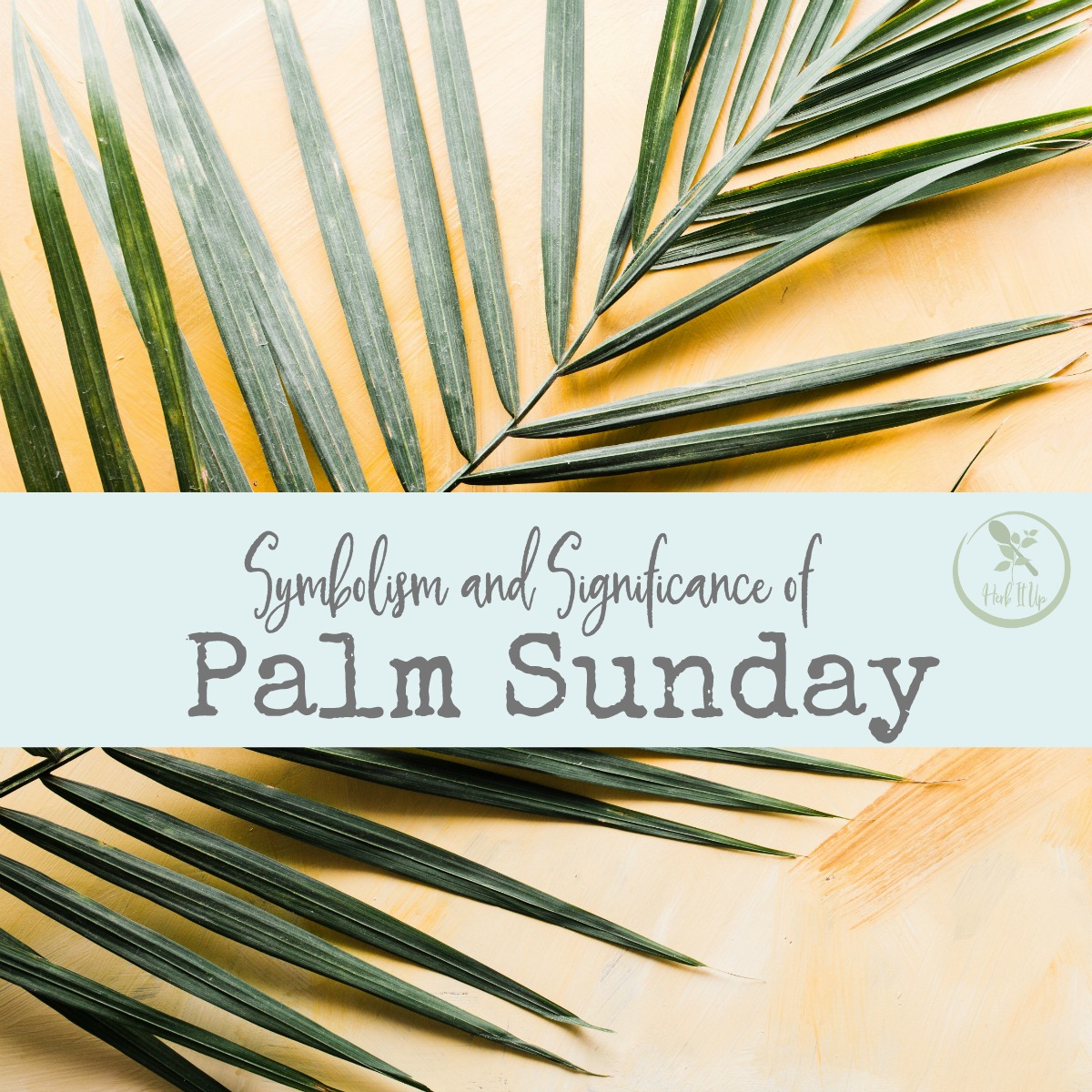 As a Christian it was so evident all the symbolism in the feasts and traditions God commanded Israel to do and remember.  All of the Old Testament points to Christ and when seen in the light of that culture it becomes even more evident.  And this week, Passion week, is so full of things pointing to Christ as the Lamb of God.

So what is the big deal about Palm Sunday and the Triumphal Entry anyway?  Why is this day written about in four gospels?  Is it just a day when Israel got caught up in emotion only to quickly be swayed a few days later?  Well, there is much more to it than that.

To really understand the significance of this week, you must first go back and study the Passover in Exodus 12.  I’ll let you look that up here and read through it, but I’ll explain the main points.  First, a little background.  After about 400 years of living in Egypt the last of which was spent as slaves under the harsh regime of the current Pharaoh, God heard and remembered their cry and sent Moses to lead them out of bondage.  Of course, Pharaoh is not about to let that happen, but after nine plagues the Egyptians are ready for them to leave and God has one last plague that will finally break Pharaoh.  Before the last plague, God has some very important details that Israel must do to be protected, which sets this one as very different from the others.

God initiates a new beginning for Israel as a nation and tells them this month (Nisan) will not only begin their life as a free nation, but will also be the beginning of their years.  He then goes on to tell them on the tenth day of the month they are to, each family, choose a male lamb one year old that is unblemished.    They are to take the lamb into their house, as a pet, for four days, until the fourteenth of the month.  On that evening, each family would then take their lamb, kill it and wipe the blood on the doorposts-the top and sides- of their house.  The lamb is then to be roasted and eaten with unleavened bread and bitter herbs and none is to be left until morning.

Those who followed the command would be protected and the angel of the Lord would “pass over” them and only inflict the last plague on those without the blood stained doorpost.  That last plague being death-death of the first born.  But the lamb provided a substitute and those covered by the blood would be spared.  This would then be a yearly observance the Israelites would be commanded to do to remember their redemption from slavery.  And point to a bigger redemption to come.

Now back to the Triumphal Entry or the Sunday when Jesus entered Jerusalem on a donkey while the crowds cheered “Hosanna to the Son of David! Blessed is He who comes in the name of the Lord!”  This Sunday as Jesus was being led into Jerusalem, there was another very significant event taking place.  The priestly shepherds who kept watch over the Paschal lambs were leading them from the shadow of the Migdal Eder into Jerusalem.

You see, this was the tenth day of the month.  The month of Nisan, their new year.  The same tenth of the month that God told Moses to set as a yearly observance.  This was the day the unblemished, male lambs were brought into Jerusalem to be chosen by each family and taken into their home.  And this was the day Jesus of Nazareth was accepted into the “home” of Israel as He rode into Jerusalem on a donkey while the crowd cheered.  Do you see the parallels and symbolism here?

He was unblemished-without sin- just as the Paschal (sacrificial) lambs were to be unblemished.  His blood would be poured out on the the cross just as the sacrificial lambs’ blood were poured out.  And interestingly enough the blood was spread on both sides and the top of the doorposts, which would form a cross.  Just as the lamb was the substitute and died in place of the firstborn of Israel, so Jesus was our substitute and died in our place on the cross.

Then there is the significance of the donkey.  Most people focus on the idea of Jesus coming in humility on a donkey.  But there is so much more to it than that.  You see, during that time kings would enter a city in one of two ways-on a horse or on a donkey.  Yes! Kings would ride on a donkey.  That seems strange to us as we think of royalty on a white stallion clad in royal regalia, but that wasn’t always the case.

During Biblical times, the way a king entered a city was representative of why and how he came.  If a king came ready for war, then yes, he would enter on a horse.  But if a king came in peace, he would enter on a donkey.  We see this in 1 Kings 1:32-38 when David has Zadok the priest anoint Solomon as the next king.  David instructs Solomon to ride on David’s own mule as he is presented to the people as the next king.    This was significant because it would indicate the kind of reign Solomon would have-a peaceful one.

David was known as a war king.  From before he became king until he reached old age, he was constantly at war with Israel’s enemies, defeating them in the name of the Lord.  It was even for this reason (he had shed much blood) that he was not allowed to build the temple of the Lord.  (1 Chron 22:8)  But in the next verse (1 Chron 22:9-10) it was said that David’s son Solomon would be a man of peace who would build the temple.  And so it was significant that as Solomon was presented to the people as their next king, he rode on a donkey, the symbol of peace.

Once we see this significance, we realize that Jesus coming into Jerusalem riding a donkey was a symbol of peace.  This first entrance into Jerusalem was indeed one of peace.  But not a temporary, earthly peace.  This was a peace between God and man.  Now, finally, the chasm between God and man could be bridged.  Once and for all man’s sin would be paid for and man would be redeemed.  Jesus would soon die on our behalf and establish eternal peace between us and God.  So the donkey was not just a sign of humility; no, it was much more. And going further, we can read in Revelation 19:11 that when Christ comes at His second coming, He will be riding a white horse.  Again much significance.  The next coming will not be a peaceful one, but one of war.  Jesus will be coming to defeat Satan and all his foes.  The time for peace will be past.  Now will be the time for our Conquering King to come and establish His kingdom on earth during the Millennial Kingdom.  Hence, He will be riding a white horse.

And so you see the Triumphal Entry, when the background, context, and culture are examined, reveals so much more than the masses being caught up in following Jesus only to have him crucified a few days later. We see how the Old Testament points to Christ.  We see the initiation of Israel as a nation and one of their most important feasts which commemorates freedom for bondage points to Jesus who would free all mankind from the bondage of sin.  And we also see the hope of our Lord returning to conquer, rule and reign.  From Genesis to Revelation, all tied together by Jesus.

Jesus Christ the Lord My Banner

Recognizing and Defeating Our Real Enemies